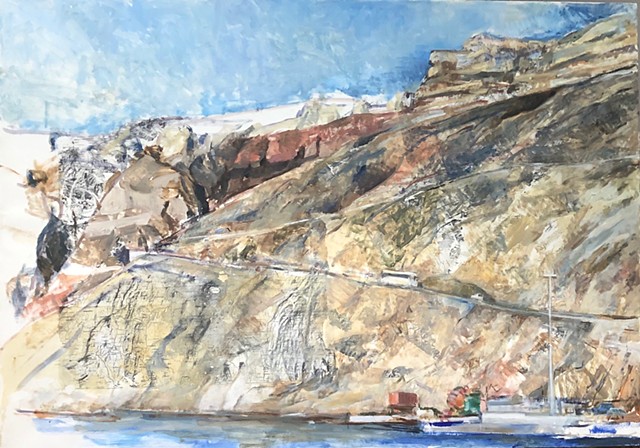 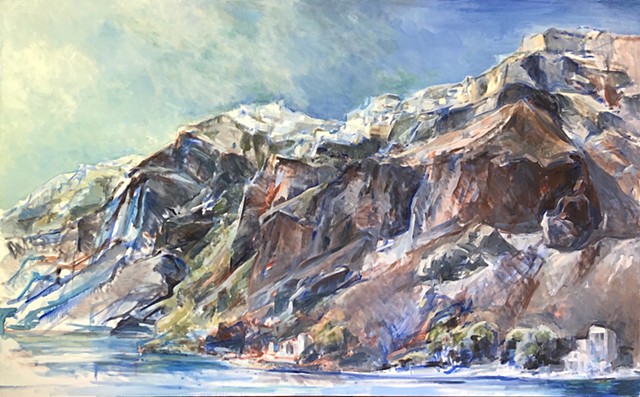 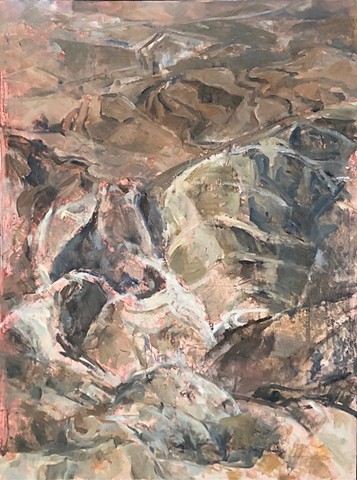 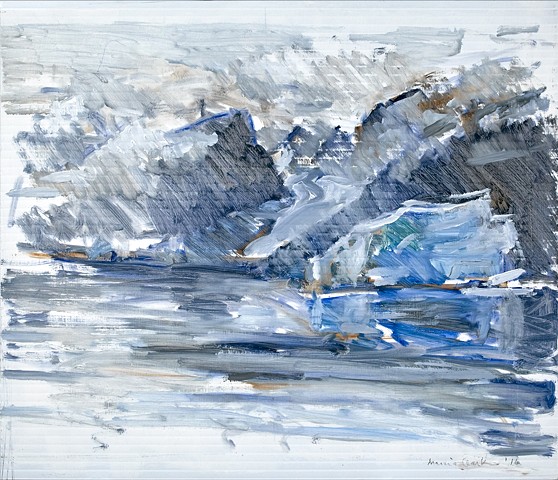 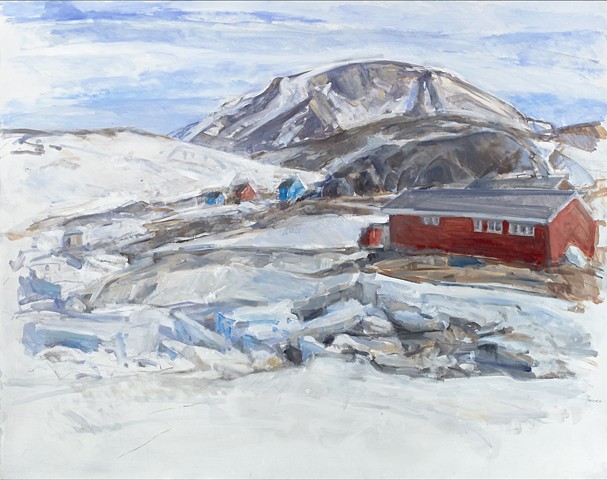 Houses on the Way to the Icefiord
oil on folded panels 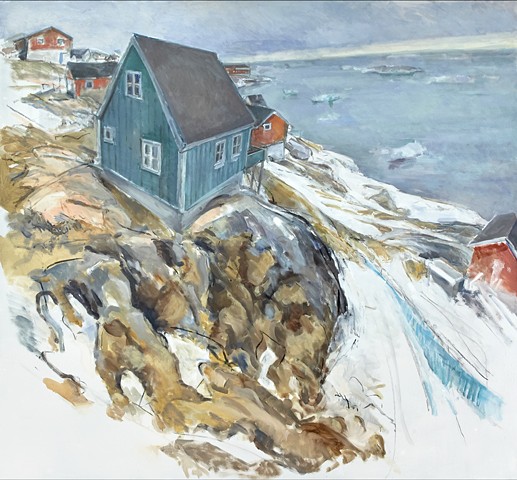 On Greece: The first group of four paintings shown here are from studies done in Santorini last spring: approaching the coast from the water, or surveying the expanse from cliff formations near the town of Fira. They are part of a group that was scheduled for exhibition at Longyear Gallery. As a result of the pandemic, the show had to be postponed. And as I continue to work on the series, I expect the outcome to be unlike my original expectations. How could it be otherwise?

My attention is also shifting to a longer view of places visited in the past. In part this is because I've had the time to reorganize work scattered throughout the house in various closets and painting racks. In part it's because of accretion. (Aging gives one more to look back upon.) But mostly it's the pandemic and encouragement to social distance drawing me inward and away from my customary external explorations. It's bitter-sweet swinging from a feeling of safe enclosure, to feeling shut away. I find that I'm aware of things going on in the world from a place that physically stays much the same. The situation does present time and space for reflection!

On the Arctic: My attention is caught by the mutability of things. It is what probably draws me to the Arctic - where you can see an iceberg in the bay that seems solid as a mountain, but can come back a few hours later and it may have disappeared, gotten dislodged and carried off by the current, or if it lingers, you may see it disintegrate.

Getting to the Arctic happened in stages: It started in White Mountains of New Hampshire where you can climb above timberline to an alpine environment. On the highest peak there is a weather observatory and in 1973 the meteorologists created a museum up there. I happened to be visiting during the early stages and was asked to paint backgrounds for historical dioramas that were being planned. They also needed a glacier for a geology display showing the glacial action that had carved the peaks and valleys of the region. I had never seen a glacier, but one interesting source I found was in a picture book about John Muir's discovery of Glacier Bay in Alaska. Muir, convinced that the High Sierras were formed by glaciers, had gone up to Alaska to see live ones in action. It took me twenty years to get there, but during the '90s I started going up to the Arctic and my first trip was to Glacier Bay. I visited Greenland in 2007 and have returned almost every year since then. My focus has been the ice: glaciers, icebergs, bits of ice in the bay, the way the light hits the ice, refracts, or the way an entire wall of ice can range from vivid color to almost invisibility, its definition changing with the subtlest changes in the light. When I first began my journeys, I saw the melting as seasonal, but it didn't take long to see that the spring melt was starting earlier and the bays were now clogging with tons of ice melt from the glaciers. The climate is changing, and in my own way I try to speak to this condition just by registering what I see in my own time and at my own tempo.

My interest in a panoramic sweep has led me to try different formats. I started by working on multiple panels, but I particularly like the folding screen and the playful way its three dimensions mimic the bends and turns in the painted landscape.

Marcia Clark has exhibited at venues that include the American Academy of Arts and Letters, Museum of the City of New York, Albany Institute of History and Art, Babcock Galleries and the University of Rhode Island. She has been a recipient of the Childe Hassam Award, a National Endowment of the Arts Artist in Residence grant and has written for Smithsonian Magazine, retracing travels of Thomas Cole, first of the Hudson River School painters. She was guest curator for an exhibition of contemporary panoramas at the Hudson River Museum and is currently artist/director of Blue Mountain Gallery. Clark has a BFA degree in painting from Yale University and a MFA degree from SUNY New Paltz.