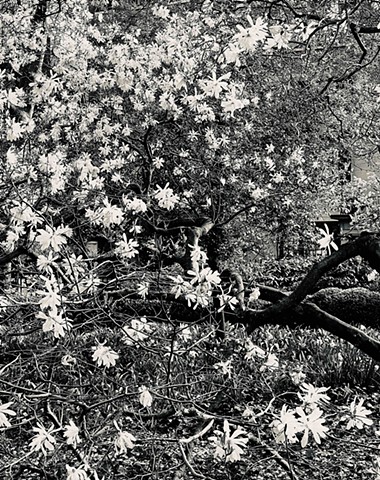 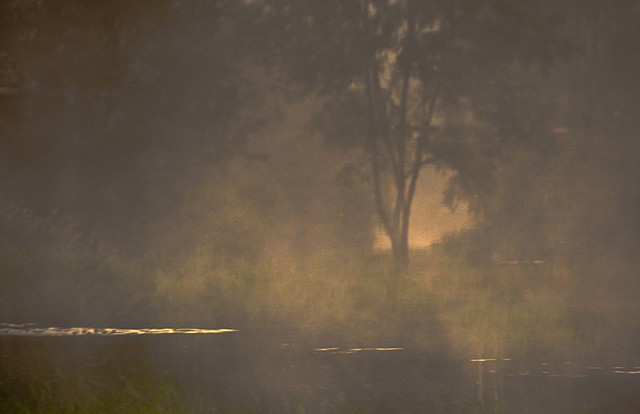 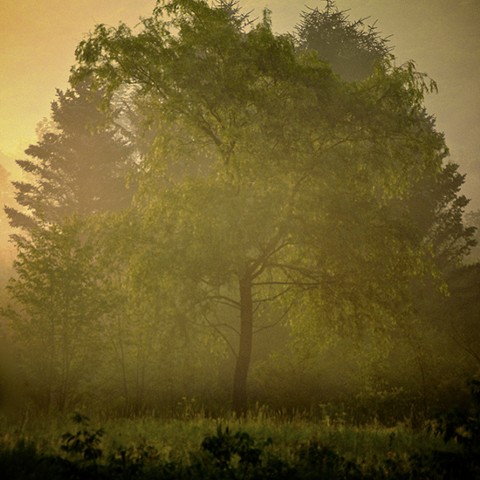 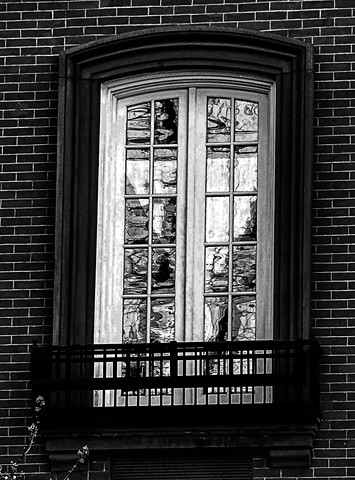 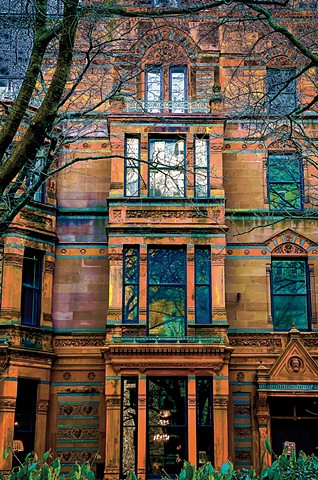 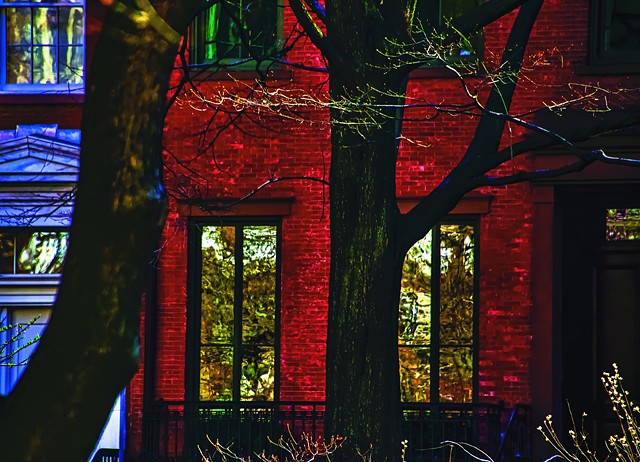 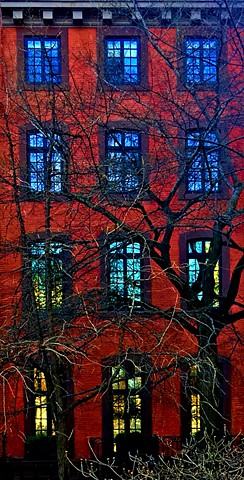 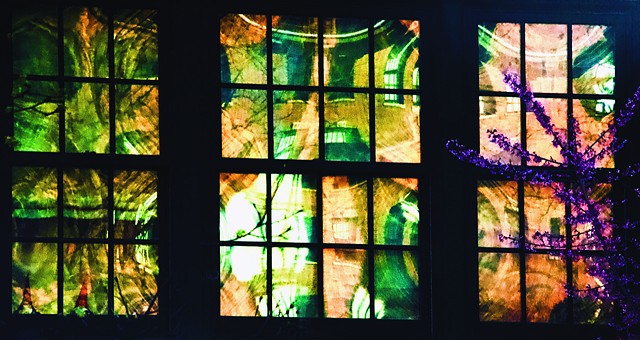 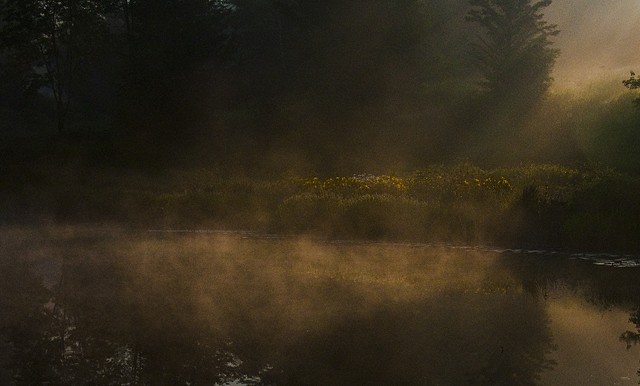 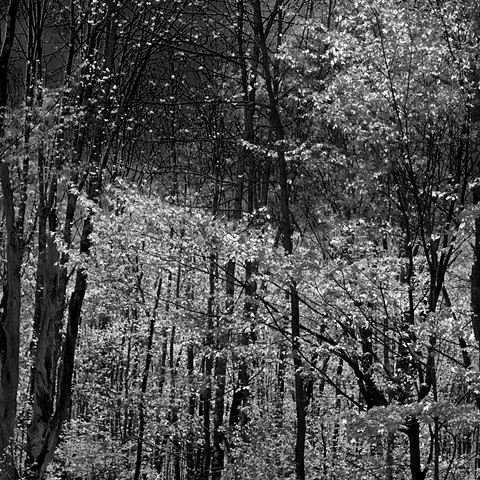 after the before time
by HELANE LEVINE-KEATING
framed, archival photograph
16" x 16" 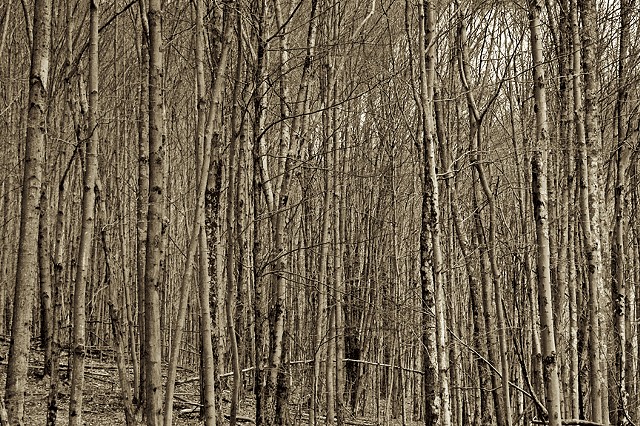 the forest or the trees?
by HELANE LEVINE-KEATING
framed, archival photograph
18" x 24" 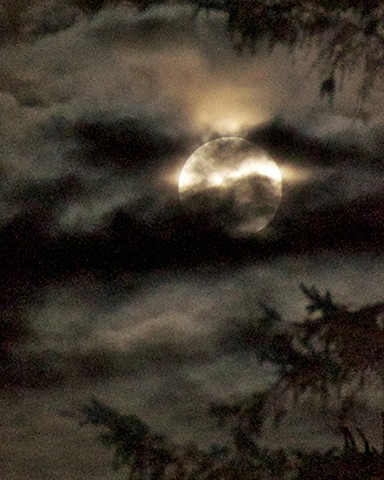 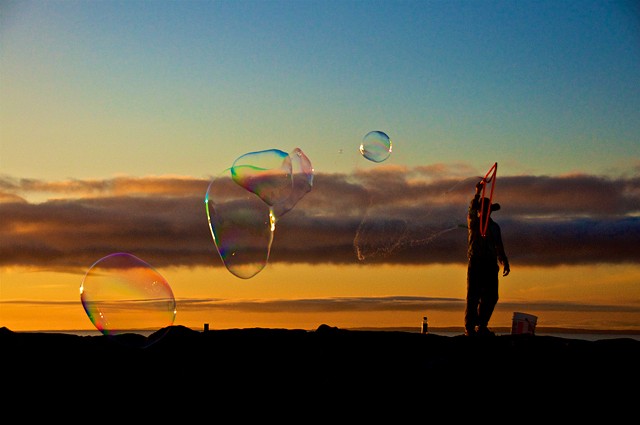 The challenge for any photographer in this current era of easy digital photography is to make one's images transcend a snapshot, so that when I photograph flowers, the mystery and sensuality of a flower's inner beauty is evoked. I seek to reveal this mystery and emotion as well in my images of landscapes and medusae (jellies), which will often mean that one is not always certain that the image is indeed of a flower or a tree or a jellyfish but appears to suggest some other unknown being that has heretofore been hidden from human view. I'm interested in making photographs that blur the line between photography and watercolor, my first love, and only by printing my own work am I able to achieve that effect. As in painting, light is central, and over the years I've become attuned to the constantly changing light of beautiful New Kingston, and I've been blessed to be able to take many of my images of my homegrown orchids and amaryllises and calla lilies as the late afternoon light illuminates them through my kitchen window. The striking vistas of the New Kingston Valley have provided magical opportunities for capturing amazing landscapes in all seasons and weather from dawn to dusk. A chance visit to the Monterey Aquarium in California opened the door to underwater photography for one who snorkels but doesn't dive. The astonishingly beautiful gardens of my friends and neighbors both in New Kingston and surrounding areas have been gifts for the eye and soul. Having switched from shooting with film to using a digital SLR in the last two years, I shoot in RAW, the digital equivalent of a film negative, and use Photoshop not for manipulation but as a digital dark room allowing me to reproduce more closely on paper what I see through the viewfinder. In printing my own archival photographs, I experiment with archival papers such as different rags and watercolor papers, metallic paper, and Japanese mulberry and rice paper, among others, which enhances the painterly technique I embrace. I print my images in various sizes, depending on the image itself, from 5" x 7" up to 16" x 20". Bio Helane Levine-Keating grew up on Long Island, New York, where her mother created an art studio in the basement for her, her sister, and a few classmates to take art classes in the basement of her home. There, throughout middle and high school, she was taught art by a renowned abstract artist, Rosalind Cohen. She eventually was drawn to photography while studying for a B.A. at the University of Rochester after discovering the remarkable photography collection housed at the George Eastman House Museum of International Photography and Film in Rochester, NY. Levine-Keating began studying and practicing her own photography in 1978 while completing a PhD in Comparative Literature at New York University, and, after moving to New Kingston, NY in 1989, became the "unofficial" photographer for the New Kingston Valley Association from 1990-2000. During those years her photographs often appeared in the Catskill Mountain News, and since 2001, she has printed her own fine art photographs. In November 2007, Levine-Keating became a member of the Longyear Gallery in Margaretville, NY, participating in monthly group shows since joining the gallery, and she had her first solo show, InSights, as Longyear's first featured artist in the spring of 2008. A second solo show, The Flowers Within, sponsored by the Roxbury Arts Group, was exhibited in the lobby of the Margaretville Memorial Hospital in November and December 2008. Her images of amaryllises, poppies, lilies, and orchids were also included in the Roxbury Art Group's curated group show, The Flower Show, January-March 2009, and in Flower Alchemy, a solo show at Longyear Gallery, Margaretville, NY May 31-June 20, 2010. Besides her close-up color images of flowers, Levine-Keating's recent photographs have focused on rural landscapes in both color and black and white and on underwater Medusae (jellies) and sea anemones taken in various aquariums. Medusae of the Sea, a solo show featuring these photographs of jellies, appeared at the Roxbury Arts Group Old Bank Gallery, Roxbury, NY, in 2010. Lucid Dreams, her solo show at the Longyear Gallery in Sept. 20-Oct. 14, 2013, focused on color landscapes, while Half-Light, her recent exhibition at the Erpf Gallery of the Catskill Center for Conservation and Development (May 6-June 7, 2014), featured landscapes taken either very early in the morning or in the late afternoon until dusk. Helane Levine-Keating is also a published poet and fiction writer who believes her photographic images evolve symbiotically with her creative writing, with each functioning as muse for the other. As a professor of modern and contemporary Comparative Literature and Creative Writing at Pace University since 1983, she incorporates art, photography, and film in her courses. She is also the co-editor of three editions of Lives Through Literature: A Thematic Anthology, 3e, Prentice-Hall, 2001. In the summer of 2012 she was a Catskill Center for Conservation and Development Platte Clove resident in photography and poetry, and she was a 2012-13 Humanities Fellow of the Pace Academy of Applied Environmental Studies at Pace University.