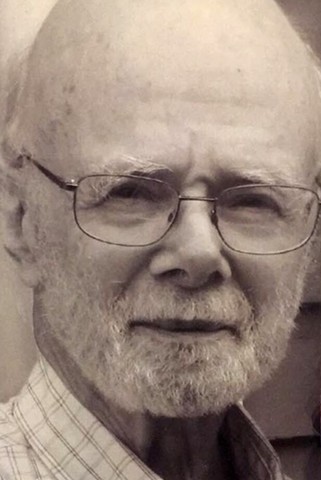 In Memoriam David Leveson 1934 - 2018 I came to photography as a skeptic. The key to a happy life, I felt, was to ‘be here now’ – to live in the moment. Cameras and the act of photographing force a wedge between the observer and the observed. They prevent full participation in the world. The stereotypic image of the much maligned, camera-laden tourist attempting to ‘capture’ vacation moments in a foreign country hung before me. But at age 29, the pressures of my profession – geology - finally forced me to buy a camera and begin taking pictures. A geologist looks at the materials, shapes and processes of the earth. A geologist also infers – what is buried, what lies over the horizon, what was and what will be – and makes claims as to origin and relationship. To support hypotheses, geologists visually document the natural world. By the 1960s, sketches, the traditional means of portrayal, had been virtually abandoned in favor of photographs. Photography furnishes the illusion of objectivity. That photography, like sketching, involves choices – what to depict, how to depict it - was down- peddled. The criterion of success for a geologist’s photograph was how it added to the strength of an hypothesis. If the photograph was aesthetically pleasing, the support it lent was likely to be stronger. In due course, a geologist without a camera came to be thought as peculiar and unacceptable as a geologist without a hammer. A geologist who was adept at photography was that much better off. The result of these considerations was the 35mm Pentax single lens reflex that became part of my field equipment. To my surprise, my opinion of photography quickly shifted. I found, paradoxically, that the act of isolating a part of the geologic universe, defining it, placing it within a frame, enhanced my awareness of the whole. It focused my attention. When looking through the camera’s lens at rocks and landscape, I became acutely aware of their visual elements - patterns and relationships, scale and dimension, line and form, color and tone – what might be called their artistic or aesthetic qualities. I was looking at things that before, I never would have noticed, never would have consciously perceived. The camera, photography, was teaching me to see. This new way of seeing benefited me as a geologist, but also became a quest in itself. I began to take pictures – at first mainly of earth materials and forms – to capture and celebrate visual attributes independent of geological considerations. I was particularly intrigued by scale. Geologists routinely include an object of known size in photographs - a penknife, a hammer, a ruler – usually for purposes of quantitative description, but also to eliminate possible confusion as to what is being viewed. By removing such measures, a foot-square outcrop can become a mountain range or continent, the side of a valley the curve of a bone. The possibilities are rampant. Alternatively, elimination of scale may inhibit all figurative interpretation, allowing the image to be read only in terms of its abstract elements. Friends who were painters encouraged me in the discovery of these ‘rock abstracts’. Having come to see geologic objects in non-geologic terms, an obvious temptation was to focus the camera lens on non-geologic objects - people, street furniture, buildings, machinery – and to allow the same kinds of celebrations and transformations to take place. My subject matter became catholic, my animadversion an ongoing romance. My lens now was not only a geologist’s, but also a photographer’s lens. It remains so. BIOGRAPHY I studied photography with Albert Freed at the Educational Alliance in New York City, and Robert B. Cowan, whose works are in the collection of the Museum of Modern Art. My early photographs were black and white darkroom prints and also color slides. Since the year 2000, I have worked with digital cameras. To obtain prints of earlier color slides, I digitized the images. I use both Photoshop and Capture NX2 to help achieve the images I envision. My book of essays and photographs, “A Sense of the Earth”, published by Natural History Press in 1971, was a National Book Award - Science Category finalist. Other photographs are included my book, “Geology and the Urban Environment”, Oxford University Press, 1980. GROUP SHOWS I am a member of the Longyear Gallery in Margaretville, N.Y. Prints of my photographs are continually on display in group shows. ONE-PERSON SHOWS A GEOLOGIST'S LENS: Longyear Gallery, 2009 DEGREES OF MOTION: Roxbury Arts Group, 2011 COASTLANDS: Longyear Gallery, 2012 THE CATSKILLS: Catskill Watershed Corp., 2012